other pages in the section:

They Were Divided into Constituant Parts

In several TmBg songs (Let Your Hair Hang Down and By The Time You Get This) Linnell mentions barking dogs being gone, or abandoning them. Now, at first I thought this was because barking dogs are annoying and interrupt the perfectly silent ending of Tiny Doctors, but then I realized... This is all a reference to Suburbia by the Pet Shop Boys. IT ALL MAKES SENSE! In Suburbia (or at least in some remixed version for a 2016 compilation album), there are barking dogs. The dogs bark long and loud, and are synth sounds programmed by Neil Tenant's friend who doesn't like Rock-a-billy, he likes PASSION. Anyways, Linnell's hatred of dogs making the only sound they can is a veiled insult and duel-challenging to PSB. Chris Lowe, I challenge you to a duel.

There needs to be a page on the wiki about all the stereo songs... I would start the page but uh... its sort of blocked on the computer I'm using rn...

misheard lyrics- Canahajorie: where a daring odd skipper dragged himself away; Never knew love: "Car top roofie" instead of Cartography, "I got roofie" instead of Biography; Iowa: Comical hat; Now is Strange: "I liked your hair, why did you change?"; See the constellation: Sigarnal image on his arm; Snowball: "Don't tease me with all of your lies";

I want to play John Linnell in a biopic

John Linnell has been my favorite John since halloween, before then it was flans, but I like linnell more right now because his music is more State Song and less Mono Puff (quite literally in fact, to the point where I am not even comparing anything at all) and that I kind of look like John linnell. I took my school photo AS JOHN LINNELL. I'll be doing this the next few years, and make my senior quote something relating to John Linnell. I think that John would be best represented by someone born when he was in his 40s. I think the best age I could be to play him would be 23. I think that john and john would accept the movie if I got all my tmbg nerd friends and wrote a big biopic script. Will it even still be a thing in like, 6 years? YES. Biopics are like, the most cheap gimmicky thing a studio can do, and a TMBG biopic would make thousands, at least! The Homestar biopic was garbage because it wasn't made by me. What if it's all CGI? Right? like... a 3d biopic, THAT's new. I would like someone who looks like flans to play flans. Haven't found one yet... I have a few contenders, but I'll have to see when I'm making it who looks enough like him. Or I could seriously miscast like they did with Daniel Radcliffe in Weird. JL is 5' 10", and I'm not much shorter. I think I'll be taller in 6 or so years. I also think I can do a good linnell impression.

Interps from the TMBW Out of Context

Before I start the list: there's a new page in town, which, so far, the only link is on the johnsona page: this page! Anyways, here goes the list of completely bonkers interps taken out of context.

after skipping 10 minutes of Join Us due to self esteem issues, (Let Your Hair Hang Down (last minute), Celebration, In fact, When Will You Die), and not being able to find a playlist of ''Album Raises New and Troubling Questions''(sad attempt at italics, I wrote em and strong later down the intro, btw) I decided to move on to just listening to Now I know and When I Was Your Age by "Weird Al" Yankovic. Anyways, Nanobots, here are me thoughts:

I've been listening to all of tmbg in chronological order since 7:15 this morning, and I've reached Mink Car. I also reached "I've Got a Fang" and I remembered on the TMBW some dude made an interp for the song saying "It's about some guy banging his gf lasofijewfhwieufhiweufiwehfuhewfiu" and I got triggered, as one does, because like, that's the stupidest thing I've ever heard, guy, get your stunking mind out of the gruuh-ter, bro. Of course "gruuh" is a thing LURCH VOIDANDALF said, and most he's ever said, anyways... Yeh Yeh is on and I gots to go throw my computer at my house. Ok, Hopeless Bleak is now on. GOOD. Anyways, I read the interps for like, Dinner Bell and some guy was all "I gotta make this song about s*x somehow" (censored b/c IDK, maybe a BIRDHOUSE IN MY SCHOOLS SOUL) Someone managed to make the song about m***er****tion. This person makes me want to throw my entire body at my house. Honestly, the wiki interps people are such sickos it makes me really want to complain about it in my TMBG blog, which I'm doing! :D Yay for blogs! Anyways, I want to make a screenshot gallery of sicko sayings. Maybe include that Dinner Bell one. 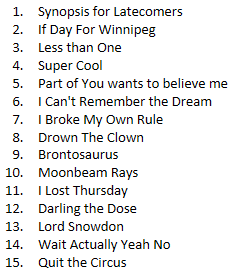 SYNOPSIS FOR LATECOMERS-For everyone who just arrived, here's a quick synopsis, for the latecomers. WHO ATE THE BABIES? This song is so great and the organ stuff, I know every weird crazy deal doesn't automatically mean SCP, but this song does feel like a massive government not wanting to be addressing a thing and then kind of saying "that's all the time we have, hahahahah bye, forget about it doo doo delledoo"

MOONBEAM RAYS- Kind of not the most amazing song on this album, i feel it might grow on me, not living up to my hype with the video either

guess what? some type of hype lived up and I made this:

I BROKE MY OWN RULE- This song is about breaking your own rule (no, duh) and is prolly the dude from the last song after he left someone he loved and broke his rule while away

Brontosaurus- small- egg, big- dino, small- bone, that's what I thought, the skinny is a neck, thick is the body and skinny is the tail that has gone on for too long. This song is about being too sensitive, skin being too pourous, being old and tired.

Lord Snowdon- Not as flutey as the book studio snippet, because that song hasn't come out yet, i'd be remiss if it wasn't Tan Minivans, I actually loved this one, however I have several songs i have listened to more recently and remember better. This song is a little more forgettable, however the triumphant horns always amp the tone of this song up.

If Day For Winnipeg- I love the boat creaking sounds. I love the fact that I was able to interpret this song on 3rd listen. This song is obviously about the capital riot, and was most likely written around that time. I think the fact that they use If Day as a connection point of a fake thing to a real life event of a bunch of nazis attacking North America. the fake thing of course is if day. Here's the deal, this song was spoken of in 2020, so... okay, this was a TMBG predicts song. That might not have happened before.

I Can't Remember The Dream- This song was like a weird dream in the video hahahahahahahahaha. I like the lyrics and can often relate to life being dissapointing. Especially how dire the future is.

Drown The Clown- The problem is that a weather woman is talking too loud (and no lyrics in the book, which is kind of dumb, it's ok cuz i printed teh lyrics out on my own lmao), and everyone has to turn that awful distraction down and drown a clown, in beer, probably. Yes, I'm making Drown the clown references in my drown the clown review. This song is kind of aggressive in it's agressiveness. To the point of where I dislike the protagonist of the song.

Darling, The Dose- This song is about someone being dramatic while being poisoned.

I Lost Thursday- It's supernatural how spaced out I get listening to this, I forget where I am, funnily enough it is Thursday as I am writing this. This song is obviously about the monotony of Quarantine. I think the "reading off this text and thinking very fast" is reading the news and panicking and the panopticons are references to zoom windows. I love the amphibian line. I don't know why it exists except to rhyme with oblivion. I never noticed the line post-historic until this listening. Most likely meaning the person losing thursday meant ending time. This song is now about the season 1 finale of Loki.

Part Of You Wants To Believe Me- A lot of references to tiny voices, and books, tiny voices being elves, books being like Book, I like the fact this song is so much more like I'm Not A Loser then Wait Actually Yeah No might even be. I have no idea yet, but I do think it will be more different. I love the guitar on this, it's so comforting. "--" I made a video of this song, you can see it here: Boss Conspiracy Hour ep. 2 2/2

Super Cool- I LOVE this song. I love the beat and tune, also the whole song is this laid back chill sounding song that you can focus on any part and it will still sound amazing. This song is about letting loose and is why the second half of book is superior to the first half, the first half has all the songs up to If day that are all about things sucking, this half has... I can't remember the dream, which is still dire, but then it gets more fun and by super cool, it's still weirdly sad, but less so.

Wait Actually Yeah No- On a south sea island wait actually, yeah, no. This song is about writer's block and not knowing what to write.

Quit The Circus- This song is about quitting the circus, retiring, perhaps? here's hoping TMBG isn't ending soon! that would suck! I only got to get into one album! I would hate them retiring at this point! It makes sense, but still, go on until you can't amirite?

Less Than One- "I took a walk I got tired, I turned around and I got almost home and then I got tired and turned around again" I love the fact I relate to this song so much, especially with the first line about burritos

Helicopters of elves- I looked up the land of nod and it turns out it's a children's furniture store. Cool. This makes me think the Elves on the shelves went even more crazy. Dropping out of helicopters and running around. Also, I like the end how it is kind of saying the elves are being on shelves.

Buckle Down Winsocki- This is a really good song, and it felt TMBG enough to fool me when I heard it on the app. I love the fact that it feels like two different songs in one. That's a good one on the side of the original composers.

There Will Be Sad- all i remember, as i was playing the hide and seek halloween homestar 2021 special is the line about in the exposition there will be sad

Fortnight-ANOTHER BOOK REFERENCE! WHY ARE CIRCUSES AND BOOKS SO PREVALENT IN BOOK?!!??! Also, this song is perfect as end credits music

or at least I really enjoy drawing him 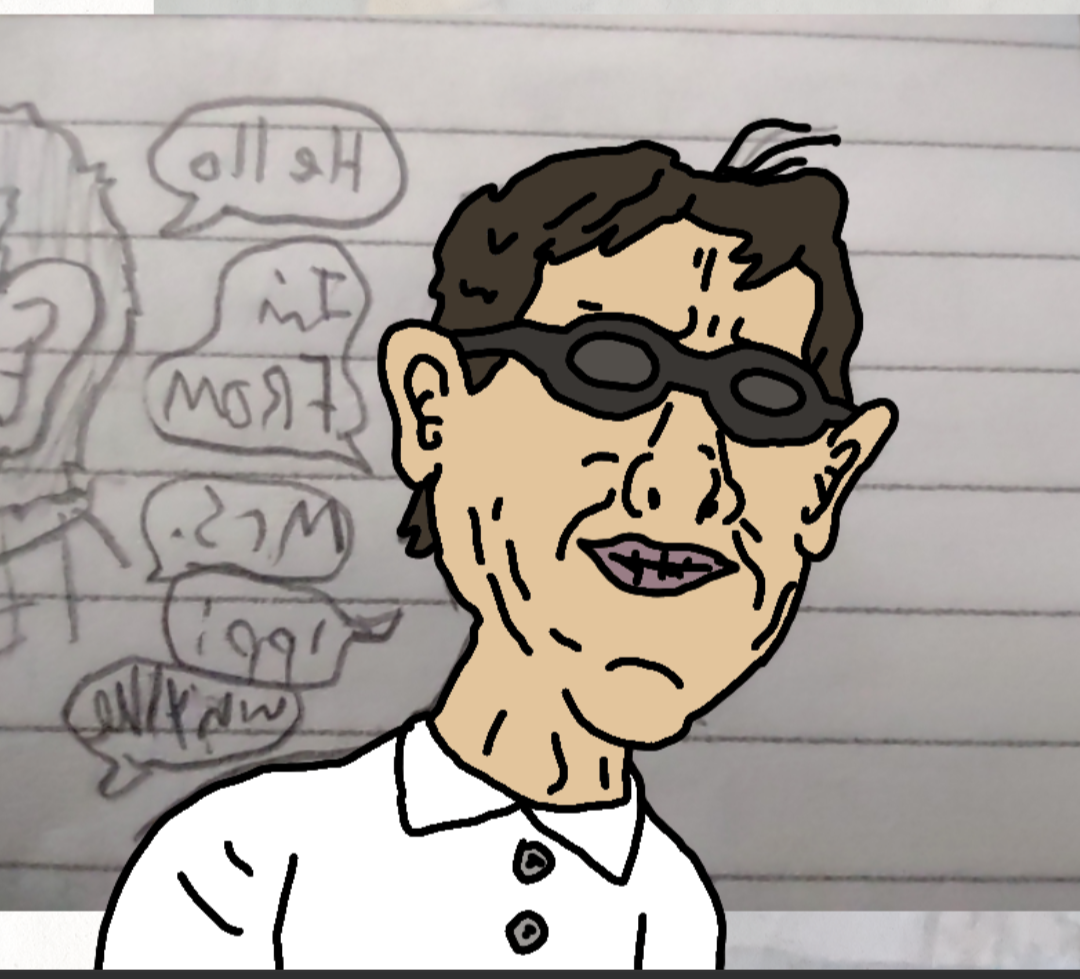 It's getting better with lies

I know that TMBG has a lot of beatles influences but like, the beginning of it's getting better sounds like I'm Finished With lies, it's insane