An Off the cufforal history of James R. D. Zenshins' creation

Let me start this by saying, before Jimmy I made homestar fan fiction (not as bad as you might thi- actually, still pretty bad), and a thing called "Dr. Spaghettiman". That was a weird cartoon with a bunny-sock monkey thing with pixel sunglasses that talked like pink sheep, from the ExplodingTNT videos.

After that train wreck, which spanned from 5th grade to early 6th, I moved on to more homestar fan stuff. This time a little less cringey. I think.

There's this thing me and my sister came up with of a family with weird names, I fleshed it into a weird thing as per usual and then abandoned it.

I had a page of a planner where I wrote "Decemberween" and crossed it out, "(some other made up christmas parody holiday name)" crossed that out and wrote "Meteormas"

I didn't cross that one out.

By the point of December... 12th I want to say, I came up with a comic/tv show idea for a thing I called "Jimmy and the 13 story house", it centered around a kid named jimmy and his dad was probably a mail man, there were milk crystals, like whatever that is, and he lived in a 13 story house. There was nothing going too much for this concept.

By, let's say the 14th, (the timeline is a little shaky) I came up with a thing where a hot dog sang the greatest american hero song, but with a joke from the simpsons, in Lisa the Vegetarian, I listed off the animals in the thought cloud, about from memory and sang this song... In the hallway of my middle school, which... yeah

this was my inspiration, as usual, a homestar reference 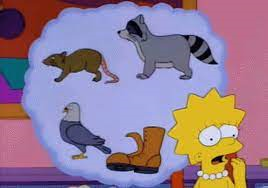 jimmy was, as homestar is, a vauge white lump with legs. Jimmy has homestar's legs, if you'll notice, and he even wore a star shirt, and the star became a vampire, during the vampire Jeff era. (don't. Ask.)

However did I come up with Jimmy? as I just said, his design was borrowed heavily from Homestar's. However, he took a "boring, not interesting personality of being the main character trope to the point where he is the villian in my the cartoon after the next cartoon" kind of life of his own.

what came first, the Bioduck or the Jeff?

Jeff is a hit, right, seven fans? or... One person who follows me on Neocities? or... 8 people from india I don't even know? Right?

Yeah, i;m not pops yet, the chop of the tops haven't locked the crops yet, but I'm still holding on.

anywazzles, Jeff did not come first, Bioduck did, I made him after a careful consideration of... drawing a duck, on the back of a history assignment. and then he had a nose, and I drew Barf (now Apiap) and then I did a really cool thing when I got a sheet of paper that wasn't a thing I had to turn in and drew Jeff, pretty much as the third thing on the page.

It's funny, all of the main characters were on the first page, except for Lugace and the boss, who would start existing later, before I got a notebook for my comics and in the 167 book, respectively.

at this point we've reached December 17th, or 19th. I know it was 2017, but the actual exact date is a bit nebulous. for all I know I created Jimmy in may!

ok, no, that isn't true, but uh, I know we've reached exactly four years ago.

the characters in their base forms